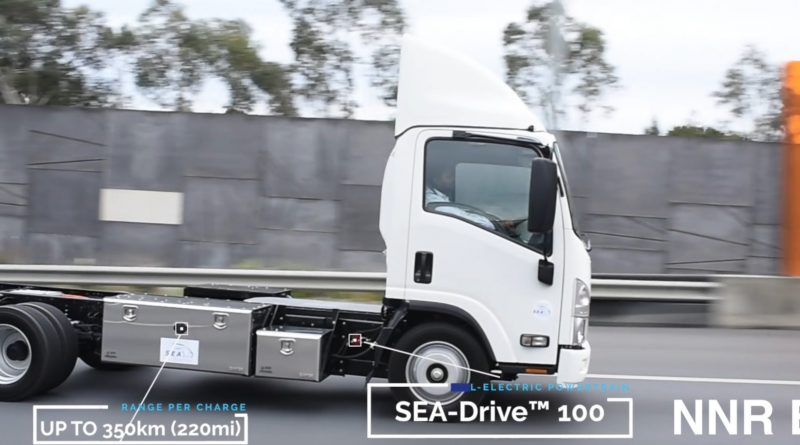 Australia’s SEA Electric to launch in the United States Leading automotive electric technology company, SEA Electric, is set to launch in the United States in coming weeks, showcasing two trucks at the ‘Work Truck Show’ in Indianapolis during March, while also attending California’s ‘Advanced Clean Transportation Expo’ in April.
The display vehicles are based on popular Ford and Isuzu platforms and are at an advanced build stage, with assembly of the Ford F-59 ‘Stripped Chassis’ taking place at Ford’s DCP assembly facility in Detroit and the Isuzu NRR being assembled nearby at a third-party plant.
SEA Electric has also recently established its own site in Los Angeles, and appointed its first US based employees to guide these new products and future projects through US certification and distribution.
SEA Electric Group Managing Director, Tony Fairweather, said that given the size of the market and its demand for EV, establishing a presence in the United States was a logical step forward for the company. “We see a lot of opportunities in the States, it’s an extremely large commercial vehicle market with a strong interest in sustainability – the US is an important part of our growth plans,” Mr Fairweather said.

“The country’s high urbanisation and sprawling cities also provide conditions where EV can deliver operators a lot of efficiency gains, not to mention the obvious environmental benefits.” The Ford F-59 Stripped Chassis is powered by the SEA-Drive™ 120b power-system which
produces 150kW of continuous power and 250kW of maximum power, but more importantly for a commercial vehicle, continuous torque of 1230Nm and an impressive maximum torque figure of 2500Nm.
The second of the display trucks is a Pantech-bodied Isuzu NRR and also features the SEA Drive™ 120b power-system.

Both vehicles have generous operating ranges of up to 350kilometres (220 miles), removing any chance of ‘range angst’ for operators. Shortly following the Work Truck Show, both vehicles will enter in-service trials with major US fleets.
SEA Electric also has a Ford Transit van program underway which will enter a trial stage in April. This van features the SEA Drive™ 70 power-system which provides continuous power of 75kW, maximum power of 134kW and 700Nm of maximum torque for an operating range of up to
350km also (220 miles). Batteries for all three vehicles can be fully charged overnight in 4-6 hours using a 20kW on board charger, which allows them to be plugged-in and charged from any three-phase power source.
Mr Fairweather said that the SEA-Drive™ powered vehicles were ideal for urban and metropolitan back-to-base distribution applications.
“For back-to-base operations EV technology is extremely attractive because at the end of the working day, these vehicles are conveniently charged overnight and ready to go again the next morning,” he said.
“Operators can expect a payback period of less than four years on their SEA-Drive™ powered truck or van, so with a battery lifecycle of approximately 10 years, there are great efficiencies to be gained over the whole life of the vehicle.” SEA Electric’s US venture builds on the company’s Australian operations, which has seen it become the EV technology supplier of choice for the domestic market.

The company is also well advanced in expanding its local assembly presence in Victoria’s Latrobe Valley (east of Melbourne), providing capacity to produce up to 2,400 CBU (completely built up) van, light commuter bus and truck units per annum