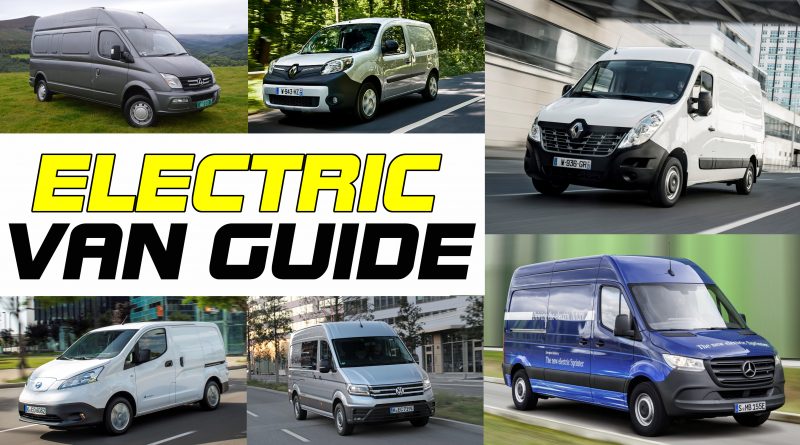 Electric vans are proving to be increasingly popular in the UK with just under 1,000 van buyers making the switch from diesel in the UK last year. However, deciding which electric van is best for you and your business can be a difficult task but luckily our ‘Electric Van Guide 2019’ is here to help.

Around 970 electric vans were registered in the UK in 2018 according to the SMMT, with the Nissan eNV200 leading the sales (585) but its alliance partner Renault not too far behind with the Kangoo ZE (330), although it’s a long way down to third with LDV and the eV80 (80). This compares to 60,000 electric cars over the same period which, again, was led by Nissan with the Leaf.

Electric vans offer huge benefits to van owners with their running costs kept low thanks to cheaper electric power, lower tax rates and fewer parts to service and repair. Other additional benefits are the access to places like the ULEZ (Ultra Low Emission Zone) and CAZ (Clean Air Zones), there’s instant torque to get heavy loads moving, they’re a lot quieter and you’ll have a clear conscience knowing your helping to reduce global warming.

However, electric vans aren’t without their downsides. The amount of charging points is a lot lower than fuel stations (around 6,500), with many of them no longer in use. Rather than the 300-600 miles you can expect to get on a full tank of diesel, the range of an electric van rarely exceeds 150 miles according to official figures and real-world range – especially in cold weather – is often significantly lower.

If you do run out, it creates a bigger problem. There’s no nipping down to the nearest petrol station with a canister; a specialist callout is usually required to recharge to huge batteries. Other downsides include the recharge time (up to 8 hours on domestic chargers), the purchase price, the residual values and the fact that batteries lose range performance over time.

Despite launching the all-new third-generation Berlingo in late 2018, electric versions of the Citroen Berlingo are only available with the older second-generation model. The latest electric Berlingos only hit the market in 2017 but the range is the smallest of any small van at just 106 miles on the NEDC test cycle.

Iveco was one of the early adopters of electric vans, with the first Daily Electric going on general sale in 2010. Since then, the battery capacities, range and performance have increase, and the big van has a big range of 125 miles.

The LDV eV80 is the only van on our list from China – the global leader for the development and sales of electric vehicles. The eV80 has a longer range than any other van of its size at 127 miles, and it is available as a panel van, minibus and chassis cab and, unlike most of its competitors, its available to charge through DC connection, cutting charging times by a half.

Read more on the LDV eV80

Daimler has been offering electric versions of its vans for over a decade but, over the past two years, there has been a much heavier focus. Although its available with either three (41.4kWh) or four (55.2kWh) batteries, the eSprinter has a poor range of just 93 miles.

Read more on the Mercedes-Benz eSprinter

The eVito has been on the market for over 10 years but, after a huge investment in electric technology, Daimler hopes to increase its trickle of sales to more sustainable levels. The eVito has a lot to offer with a choice of a short or long wheelbase and a payload of over one tonne.

Read more on the Mercedes-Benz eVito

With sales reaching 585 units in 2018, the Nissan eNV200 outsells all the other electric vans in the UK put together. Looking at the facts and figures, its not hard to see why; it has a low starting price (£19,116 plus VAT), a practical 705kg payload, an excellent range (174 miles) from the new 40kWh battery and a powerful 80kW (109hp) electric motor.

Read more on the Nissan eNV200

As with the Citroen Berlingo Electric, the Peugeot Partner Electric is based on the older second-generation model and the technology already seems outdated compared with its Renault and Nissan rivals, falling short on range, power and payload.

The Renault Kangoo ZE is the second-best selling electric van in the UK with sales of 330 in 2018; just over half that of its Nissan rival. Compared with the eNV200, the Renault is cheaper (£14,119 plus VAT, if you choose to rent the battery from £50 per month) and it has a great range of 170 miles thanks to a new 33kWh battery.

Available with a choice of three wheelbases and two roof heights, Renault Master ZE offers more variety than any other electric van. Employing the same newly-developed 33kWh battery pack as the Kangoo ZE, the Master ZE has less range than its smaller sibling due to the increased weight and more powerful 75hp motor.

Read more on the Volkswagen eCrafter