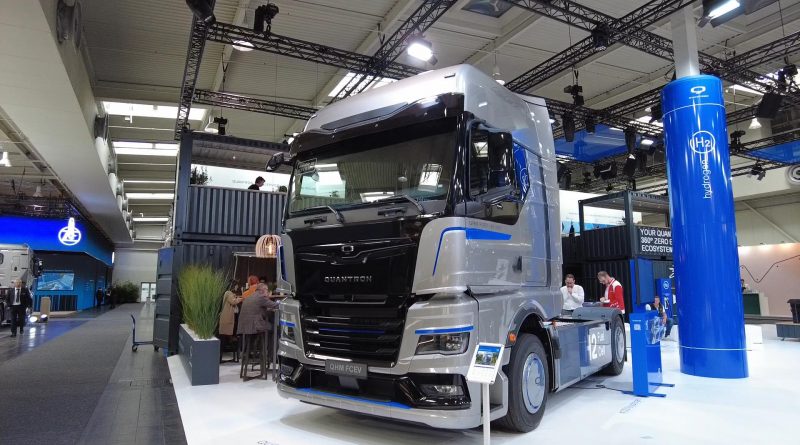 QUANTRON Trucks launched their H2-powered truck at the IAA Show in Hanover which can go up to 1,500km for its Nordic version and up to 700 km for its standard EU version. Indeed its impressed a number of operators resulting in more than 250 initial inquiries, which has led to them ordering 140 fuel cell engines from Ballard Power Systems, one of the world’s leading hydrogen experts

The QUANTRON FCEV system developed by Ballard Power is the first heavy duty truck specific tailor made system in 43 years of Ballard history and in the next step, a total of four FCEV models are planned in cooperation with Ballard Power for 2023, all hydrogen-powered and zero-emission.

At the IAA Transportation 2022 in Hanover, QUANTRON is currently presenting the QUANTRON QHM FCEV hydrogen truck, a world champion in terms of range. The vehicle with integrated FCmove™-XD 120 kW fuel cell from Ballard Power Systems (NASDAQ: BLDP), one of the world’s leading hydrogen experts, reaches up to 1,500km in the QUANTRON QHM 44-2000 variant. The QUANTRON QHM FCEV was unveiled yesterday at the trade fair and more than 250 initial inquiries and the first orders for the vehicle have already been placed. These include Germany with a particularly high demand in the context of the recent funding applications as well as Norway for which the QUANTRON QHM FCEV 44-2000 variant was specially developed as an operating area.

As a result, QUANTRON ordered 140 fuel cell engines from Ballard to secure the supply chain, totaling approximately 17MW with an option to purchase an additional 50 units. The fuel cell modules are expected to be delivered in 2023 and 2024. As of September 2021, QUANTRON and Ballard are engaged in a strategic partnership to accelerate the development of heavy duty hydrogen vehicles. Resulting from this strong cooperation, Ballard has made a minority equity investment in Quantron AG as part of QUANTRON’s financing round of up to 50 million euros. Ballard’s investment proceeds will be used by QUANTRON to develop their truck fuel cell vehicle