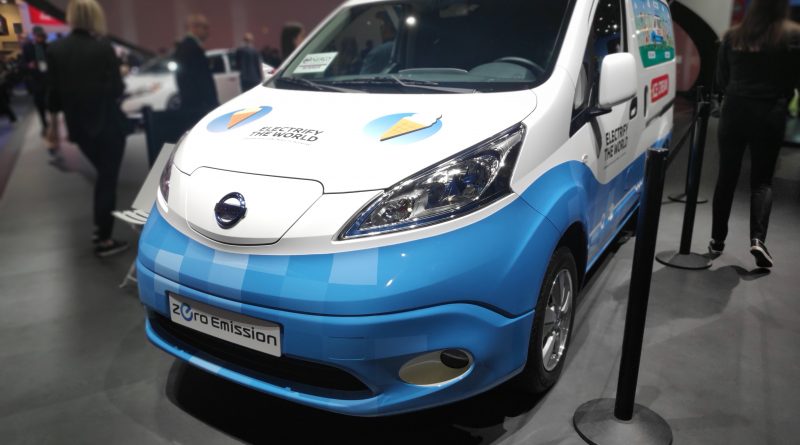 The Nissan stand was mainly based around the passenger car side of the business and there were no representatives from the commercial vehicle division although they did have a NV200 van on the stand. In fact to be exact it was the electric version the e-NV200 and it was used to offer CES delegates ice – creams from the rear and to show off its ability to dish out frozen products.

The irony of its inclusion on the stand only becomes apparent when you realise the e-NV200 is not available in the US, whilst two trim level versions of the NV200 are available, Nissan has not brought over the electric version. There are probably a couple of reasons for this as no-one was available on the stand to talk to, one can only surmise that Nissan globally are selling as many electric NV200 as they can or at least they are happy to sell. This is probably confirmed by the fact the NV 200 factory in Barcelona is now only producing electric versions of the vehicle. The second reason is they are already developing the replacement to the NV200 along with Renault ( this has been announced in Europe) so it just wasn’t worth the development and homologation costs to bring it over from Japan / Europe for a very limited time.

Nissan have a very extensive range in the US and the bulk of the commercial vehicle offerings are dedicated to the North American ( certainly not Europe) comprising of products such as the full size Titan Pickup and a range of “NV” vans and people carriers similar in size to the Transit Connect and Transit called the NV1500, NV2500 and NV3500. They also offer the Nissan Navara under the name of Frontier which completes their commercial vehicle offerings.