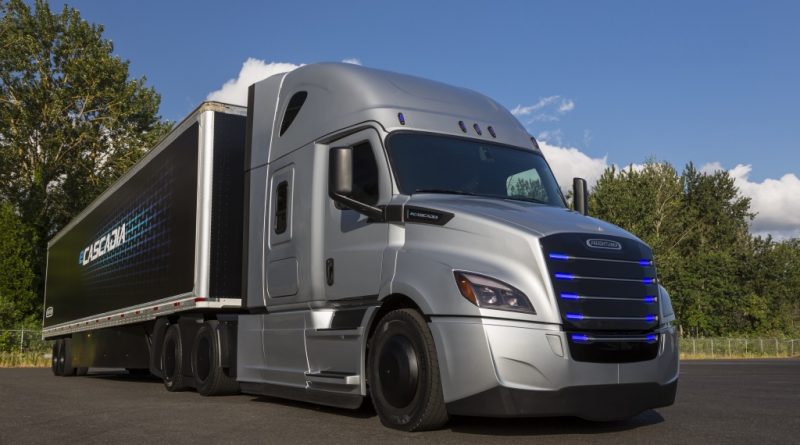 At an event on the west coast of the US, Daimler Trucks North America confirmed what we have probably know for the last six months, that Daimler /Mercedes-Benz /Fuso believe the way forward to a zero emission free road transport sector in through fully electric battery trucks.

Roger Nielsen, president and CEO of Daimler Trucks North America (DTNA), the oft repeated mantra ” I believe the future is electric” , which basically translates to the whole of the Daimler Group is going headlong into full batteries, leaving plug-in hybrids along the roadway.

What about the rest ?

Natural gas in one form or another (CNG/LNG) are going to continue to power medium- and heavy-duty vehicles in their Freightliner line-up but only as a “stop gap” until full commercialization of the battery-electric Freightliner eM2 and eCascadia. Iveco’s reaction to this will be interesting considering their love affair with gas and its also interesting that Daimler prefaced their gas comments with “nearly zero emission”, which sort of starts to explain their stance.

The other much touted solution, certainly for long haul operations, has been the hydrogen fuel cell and Daimler sees its potential to extend battery-electric truck range, but not yet as explained by Roger Nielsen “I can see glimpse of it over the horizon, but it will not be this generation of engineers who will be delivering it”. A bit disappointing really on a personal note!

Unfortunately, this vision of the future is not just dependent on Daimlers engineers as good as they may, but on three goals been achieved.

Firstly a common battery-electric vehicle charging infrastructure and as part of this goal, the Daimler Group are a founding member of CharIN, an organization whose aim is to standardize charging requirements for electric vehicles, including commercial vehicles.

Secondly, batteries must become cheaper, lighter, and more powerful, which to be honest goes without saying.

Finally, the real cost of ownership for customers must be strengthened through increased incentives, decreased maintenance costs, and cheaper energy costs.

The group will already have nearly 200 battery-electric vehicles running around on a global basis and “For our engineers, these early customer partners are our test drivers. We want them to test these vehicles to their extremes. We want to see the failures so we can engineer solutions,” said Nielsen.

DTNA’s Portland plant will be the centre of excellence and preparing for an electric future in a number of ways, some more interesting than others but it includes series production of electric Freightliners within the next two years.