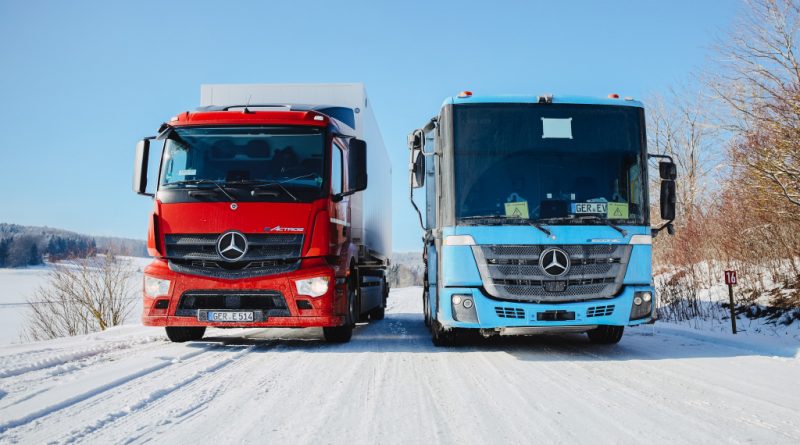 Its been over two years since I stepped into the first generation eActros at an event in Germany, that was a three axle unit and a lot testing and selective customer trials have taken place over those years. It has always been known that the first generation trucks would be exactly that, basically research and development vehicles but with customers.

The next step after this, is to prepare for the second generation building on the lessons learnt from the first generation products and also to take advantage of technology and battery improvements.

So we get to the next generation which Daimler / Mercedes-Benz are calling ‘Near-series prototypes’ and in the latest series of tests Mercedes-Benz research and development engineers have taken an eActros and eEconic through an in-depth series of different tests on the Swabian Jura ( basically the German Alps) in the freezing cold of February this year.

The team paid special attention to the behaviour of the batteries and the electrical powertrain under extreme weather conditions. But its not just those that need careful monitoring as the thermal and energy management systems also need testing intensively as they ensure both the powertrain and the driver’s cab are maintained energy-efficiently at the right temperatures even when the outside temperature is extremely low. After the testing, Mercedes-Benz confirmed the eActros and the eEconic are capable of operation in winter conditions!

The launch of series production of the Mercedes-Benz eActros for heavy-duty distribution is planned for this year. However, the series-production eActros will be significantly superior to the current prototype in some aspects, such as range, drive power and safety. Series production of the Mercedes-Benz eEconic low-floor truck for municipal operations, which is based on the eActros, is scheduled for the coming year — the first customer tests are currently being planned. The eEconic will mainly be used as a waste-collection vehicle in urban waste-management applications.