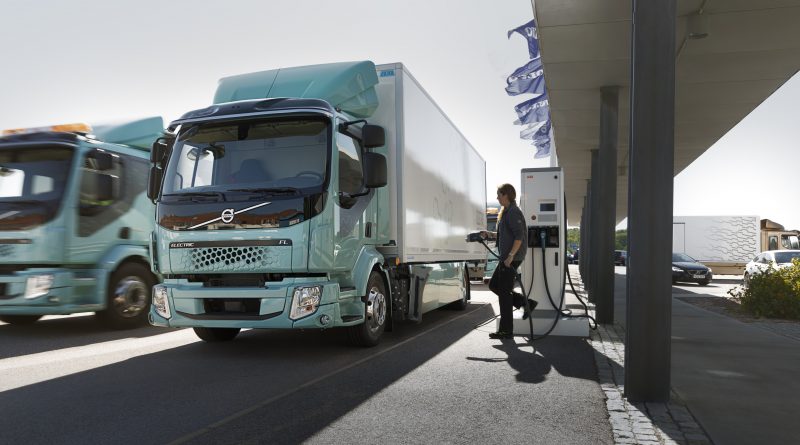 It appears to many in the industry the urban delivery / distribution sector will be the first to make the transition from diesel to electric, and that certainly seems the view of the truck manufacturers as the vast majority are developing and trialling either two or three axles electric powertrains. When it comes to Volvo Trucks their electric rigid trucks are mainly based around the familiar FL and FE models ( although there are electric FM/FMX) , we recently had the opportunity to test drive the heavier second generation FE at a test track in the home counties.

The Volvo FE 26 tonne 6×2 rigid with a tag axle uses a modular type design for the motors and it uses two motors each developing 270 bhp (200kW) of power and 425Nm of torque, resulting in 540bhp and 850Nm and is a similar set up to those used by Volvo’s bus division. Linked to the motors is a EPT802 two speed gearbox which utilises the motor’s range as efficient as possible. The gearbox is an in-house design and has independent power providing gear shifting without interruption in power.

Following many manufacturers approach, Volvo Trucks has split its battery offerings into a modular pack solution meaning customers have the option of matching their operational requirements as far as range and charging times are concerned. There are a maximum of four battery packs available with on the FE with each pack rated at 66 kWh resulting in a overall battery size of 262kWh and having an estimated lifetime of 8–10 years depending on your operations, although there’s no mention of mileage limitations.

As this is a rigid truck solution and therefore obviously many applications may require ‘auxiliary’ power most notably via a PTO, and Volvo provide an ePTO for such occasions. The ePTO has an power output of 100 kW/70 kW ( Peak / Continuous) and torque of 530 Nm/270 Nm ( Peak / Continuous).

When it comes to the all important payload issue, the FE weighs around two tonne more than its diesel equivalent but due to the one tonne gross vehicle weight allowance for alternatively fuelled vehicles, there’s just a net payload reduction around one tonne.

The batteries are charged via a ‘standard’ CCS Type 2 connection and there’s also an on-board 22kW AC charger so customers can either charge via AC or DC and an AC charging cable is supplied with the vehicle. Volvo Trucks also supplies and installs a 22kW charger at the operators premises. Finally, you can also charge at external DC stations for faster charging, assuming that they can deliver an output voltage of up to 750 V and this results in a 2 hour charge or 11 hours if using the AC cable.

With a full bank of four batteries the 26 tonner FE has an operating range up to 200kms but obviously this is totally dependent on the driving conditions, temperature, terrain etc.

Approaching the FE, it looks no different than any other Volvo FE three axle rigid and that includes the instrument panel, but upon closer inspection whilst the dials looks familiar they are monitoring completely different levels compared to the diesel equivalent. There are two large dials at the top, the left monitors the input and output into the batteries whilst the right shows the speed with two smaller dials for the braking system and battery level. The LCD information panel in the centre also shows various data, mainly based around the state of charge, battery voltage, mileage etc.

Starting the truck is a simple case of turning the keys until a ready light is shown and then pressing the drive button which is incidentally the same as the diesel versions, indeed nearly all the switchgear is common with the diesel version.

Once on the road, the truck has a great turn of speed even though we were almost fully loaded at around 23 tonnes and is obviously quieter than the diesel equivalent, the two speed transmission is seamless in action. It didn’t take long before the brakes were needed and that’s were the drive got a little more interesting, ordinarily there are two or three stages to the regeneration brakes operated via a switch or stalk. The FE doesn’t have any of these, and the regeneration brakes which put power back into the battery, are operated via the foot brake only and the regeneration is applied commensurate to the strength of the foot application. The level of power being inputted into the battery via the braking regeneration can be monitored in the instrumental panel and helps the driver extend the range of the truck, which is always a good thing! Although I have to say, I am not totally convinced by this method of battery regeneration, it maybe because its different but I like the idea of specific levels of regeneration controllable via a stalk or switch but I need more information on the system to make a definitive comment, it’s just first impressions!

There can be no doubt Volvo Trucks are totally committed to electric trucks and the FE is a great example of the ‘here and now’. There are still questions around the commercial viability of electric trucks, but that’s not just a Volvo Truck issue, of course total life costs are partially offset by lower repair and maintenance cost ( around 30-40%) and every electric truck comes along with a five year Volvo Gold Contract which includes preventative maintenance, Driveline repairs, non-driveline and an uptime promise. So, if you are looking at zero emission road transport solution in the distribution sector then the FE is certainly worth a look, the only thing that’s missing is the price which Volvo Trucks won’t currently release!