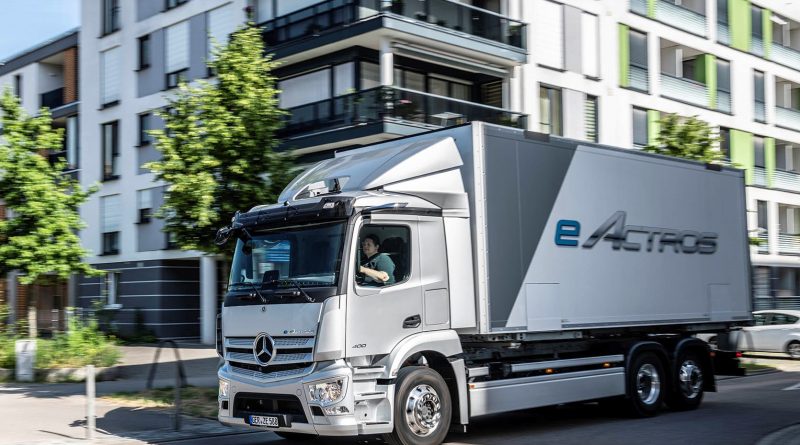 After the first eActros appeared more than three years ago as part of Daimlers “eActros innovation fleet” and a series of subsequent customer trials aimed at gaining valuable data and information regarding their operation, Mercedes-Benz Trucks has announced the launch of the series-production model.

The eActros will be the first series Mercedes-Benz production electric truck although many will point to the fact that the eCanter was the first electric Daimler truck to enter series production. The standard model of the eActros is planned to roll off the production line in Wörth am Rhein (Germany) from autumn 2021. The eActros is now ready to assist customers of Mercedes-Benz Trucks on the road to CO2-neutral transport services.

Continuing with the approach taken the group, the batteries are of a modular design and in the case of the eActros each pack has a capacity of 105kWh and the series-production model is equipped with either three or four battery packs. Obviously with four batteries packs the maximum capacity will be 420 kWh and this results in a potential range of up to 400 kilometres to be achieved.

There are various combinations of motors and transmission setups available to manufacturers and the eActros has a rigid electric axle with two integrated electric motors at either rear wheel matched to a two-speed transmission. The liquid-cooled motors generate a continuous output of 330 kW as well as a top performance of 400 kW and as with most other systems the braking regeneration allows energy input to the batteries helping to provide further opportunity to potentially extend the range.

As far as charging is concerned the eActros can be charged with up to 160 kW when connected to a regular 400A DC charging station, the battery packs need little more than one hour to charge from 20 to 80%. Mercedes-Benz can even help you with charging as they have established a strategic partnership with ENGIE and EVBox Group.

Mercedes-Benz Drivability of the setup

As with most full electric vehicles, it features a constant delivery of power with high starting torque and the two electric wheel motors are coupled with a two-speed transmission providing good acceleration and driving dynamics which enable a more relaxed, low-stress driving than a conventional diesel-powered truck. Under full load there’s virtually no or very low in cab noise of around 10 dB which roughly corresponds to a halving of perceptible noise volume and perhaps just as importantly there are noticeably fewer vibrations. The eActros also has a very low centre of gravity and this matched to the low noise makes for a pleasant driving environment.

Its obvious to truck manufacturers that electric trucks should not be viewed in isolation but they need to create an’ ecosystem’ around the truck which Mercedes-Benz has recognised and calls eMobility and eConsulting. Those choosing an eActros will not be without support as Mercedes-Benz have developed an eco-system which also provides advice and services, as well as a range of digital solutions to increase capacity utilisation of the vehicle and to optimise the total cost of ownership.

For instance, range anxiety is a real issue for many electric vehicle operators and using a customer’s existing route plans, it is possible to establish a highly realistic and meaningful usage profile. Their eConsulting approach doesn’t just include electrification of the depot, but, if the customer requires, also covers questions such as planning, applying for and implementing everything to do with the charging infrastructure and connection to the electricity network. T

The Multimedia Cockpit Interactive comes as standard in the eActros showing the charge level of the batteries and the remaining range, as well as the current and average energy consumption and of course Daimlers telematics system Fleetboard is available for fleet managers. As well as creating charging profiles there’s also a mapping tool which shows the vehicle’s current location in real-time, as well as whether it is in motion, parked or being charged, not to mention how high the battery charge is.

Mercedes-Benz Complete – a service contract including the All-round Carefree Package and this includes an uptime commitment which is helped by their fully automatic telediagnosis which continuously monitors the status of several vehicle systems in the truck in real time and can perform over the air (OTA) system updates.

Electric trucks have slightly different safety requirements from their diesel equivalents for instance special crash elements with an aluminium profile protect the batteries in the event of a side-on crash, while sensors integrated in these can detect a crash scenario. In such a case, the HV battery would be automatically isolated from the rest of the vehicle and the driver always has the option of actuating the HV shutoff at any time in the cab. Meanwhile, to ensure the vehicle is easier for road users like pedestrians and cyclists to hear, the eActros comes as standard with an external Acoustic Vehicle Alerting System (AVAS) and Sideguard Assist which comes as standard on the eActros. Another system which is part of the standard scope of equipment is the fifth-generation Active Brake Assist emergency braking system with pedestrian recognition.

Click here to watch our video on the electric Fuso eCanter