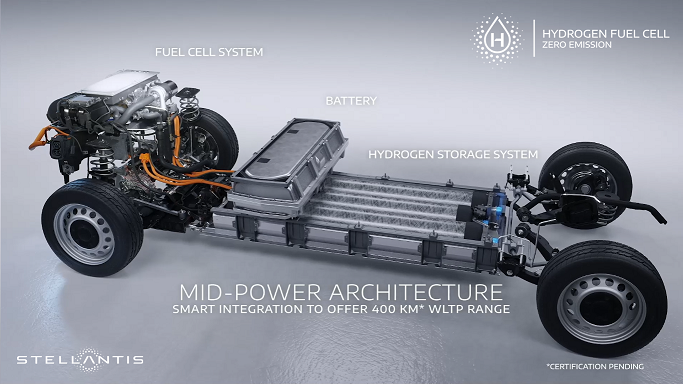 Stellantis, PSA Group’s parent company have basically turned the whole of the zero emission light commercial vehicle industry upside down with just one press release! Up until now, the basic rule of thumb has been the next generation of zero emission vans will be battery electric and hydrogen fuel cell would be the sole domain of long haul heavy trucks. That was until Stellantis announced they have developed a hydrogen fuel cell medium sector van and its ready to launch this year!!

Why buck the trend?

Well , first of all let’s not forget PSA Group through their Citroen Dispatch , Peugeot Expert, Opel/Vauxhall Vivaro, have a very useful and well received all battery electric van so this will run along side these models although there is an exception which we will cover later in the article. Stellantis believe battery electric is not the answer for every van operators situation and the key benefits of hydrogen which includes they are zero emission, designed for long driving range and offer fast refuelling make it a viable alternative for some operations.

Stellantis and the mid-power fuel cell

Stellantis are keen to explain their version of hydrogen fuel cell is really a blend of currently available fuel cell systems, which they are calling a ‘mid power concept’. A more traditional fuel cell arrangement is a full power system in which a large fuel cell is the main power source under ALL operating conditions and requires a sizeable fuel cell but a relatively small battery. In the opposite structure like a range extender, it has a large battery rating in comparison to the fuel cell unit which extends the range of the vehicle by providing power to the battery. Although when the battery is depleted, the fuel cell isn’t capable of providing enough energy solely to move the vehicle, just a limp-home facility.

In the case of the Stellantis system, its a combination of the two, as can be seen in the diagram below.

Why go for this system?

According to Stellantis, their arrangement enables smart packaging of the components and the whole system can be accommodated by using their existing battery electric van, fitting the Symbio fuel cell unit under the bonnet and the smaller battery pack sitting under the seats, finally the Faurecia hydrogen tanks replace the battery cells under the van floor. This effective use of space means the modifications have no bearing on the cargo space or payload. Unlike a battery electric van, this system is also capable of providing enough power for continuous high speed and with an on-board battery, any energy generated by regen braking can be stored with a fully topped battery capable of providing up to 50 kms (31 miles) by itself. The result is a van that can be fully refuelled in around three minutes with a range of approximately 400km (250 miles) although WLTP certification is still pending.

But there are challenges

Stellantis and PSA Group acknowledge there are challenges, particularly in four main areas :

Now for the bad news

Sorry to leave the bad news until the end for those that fancied trying one, but first of all there’s no mention of prices and, more importantly, for us here in the UK whilst they do mention an Opel Vivaro version they don’t mention a Vauxhall Vivaro model which basically means there’ no right hand drive yet.

Click here to read about the all electric Ford Transit Custom