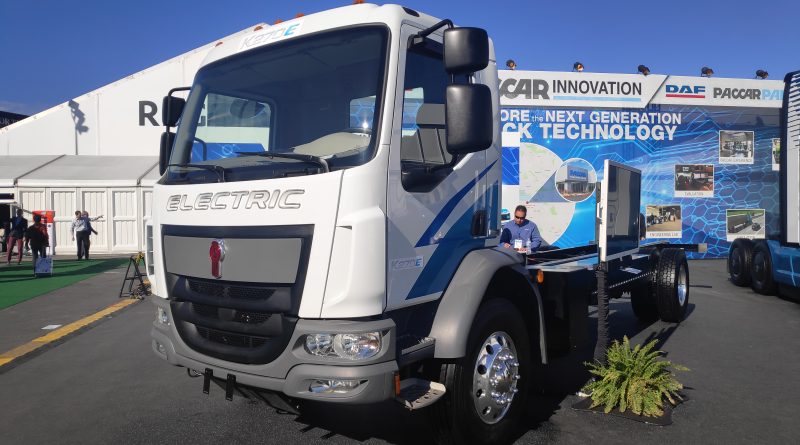 The Paccar group have been at CES for a couple of years now and show both Peterbilt and Kenworth product. Last year their focus was on Battery Electric Vehicles (BEV) and also the joint work they are undertaking with probably greatest automotive global exponent of Fuel Cell (FC) technology Toyota (for this moment I am not counting Nikola as a global brand ). Infact Paccar already have product working in California with this technology on a full scale trail.

This year they had two Kenworths and a Peterbilt, a Class 6 / 7 Kenworth E270 which will look very familiar to UK operators as it boasts the DAF cab, referred to as “Cab-Overs” in the US, and uses technology similar to that used by the Leyland Trucks team and seen in Europe. It has the TM4 electric motive package from Dana Spicer featuring a modular set of batteries and motor as well as a battery management system (BMS). It has a 200 mile range with AC charging at 9 hours and DC charging at 1 hour dependent on the battery size which goes from 160, 200 and 240kWh.

The other Kenworth was a T680 sleeper cab tractor unit demonstrating Paccars autonomous vehicle technologies consisting of a mixture of cameras, Lidar and Radar products enabling Level 4 autonomy. There are nine cameras, backed up by a further three radar and three lidar systems.

Finally, there was an electric Peterbilt 520E 8×4 refuse (or ‘garbage’ for our American readers) truck with a tag axle but unlike the Kenworth using the Dana Spicer TM4 electric package it had a Meritor system with battery packs from Nissan. It was interesting as the refuse truck was a side bin loader so it had one of the two sets of batteries ( 308-420kWh capacity)  at the rear of the cab and another set along one side of the chassis. The motor generates power of between 370-500 kW giving it a range of between 60-90 miles with a DC rapid charge time of 1 hour via the biggest charger connection I have ever seen on a truck, but it would have to be to give a one hour charge time for a 308-420kWh battery!