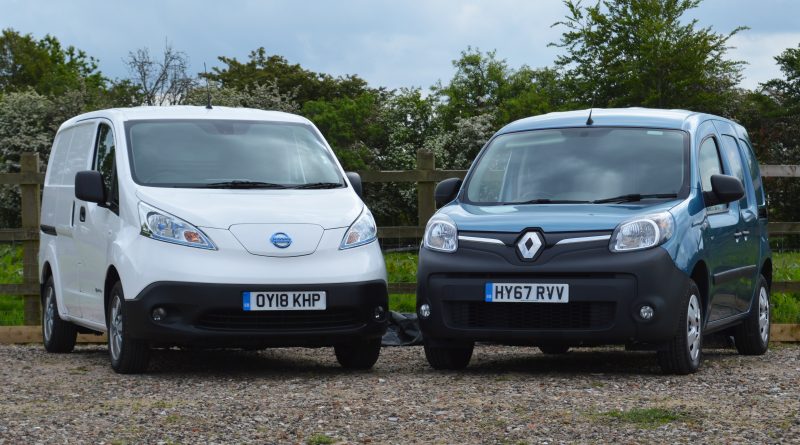 The Nissan eNV200 and Renault Kangoo ZE are Europe’s two best-selling electric vans, selling in excess of 50,000 units over their short lives. For the first time ever, Electric Van & Truck is carrying out a head-to-head report between the two vans to help you decide which one is best for you and your business.

The Renault Kangoo ZE was the first mass produced electric van to be offered from a ‘mainstream’ manufacturer when it hit the market in 2011. Initially, it came with just a 22kWh battery pack and the range was very limited at just 110 miles (NEDC), however, its innovation won it the ‘International Van of the Year’ title in 2012 and it sold 6,665 units in its first year.

Two years later, Renault’s sibling, Nissan, unveiled a new electric van – the Nissan eNV200 – at the Tokyo Motor Show. Nissan began trials with the production model later that year with major fleets around the world, including 28 units to British Gas in November 2013.

The Nissan eNV200 finally went into production at Nissan’s Barcelona factory in 2014 and by 2016, was Europe’s best-selling electric van. In the same year, Renault upgraded its offering by introducing a larger 33kWh battery, increasing the range to 160 miles. In 2018, Nissan stole the show again increasing its battery size from 24kWh to 40kWh and the range from 110 miles to 171 miles (NEDC).

Planning ahead and anticipation is the key to getting the most out of the battery and its very useful, therefore, that both vehicles offer excellent visibility. Despite the large, low-sitting windows of the Kangoo ZE, the eNV200 comes out on top though thanks to its raised seating position – which is the highest of all small vans.

The Kangoo ZE offers more storage and is the more spacious of the two, however, it does feel rather dated compared with the eNV200 which was updated last year. The instruments are all digital on the eNV200 too, rather than the analogue dials on the Kangoo ZE.

In terms of specification, there are three trim levels offered on the eNV200 (Visia, Acenta and Tekna) but just one basic trim on the Kangoo ZE (Business).

The eNV200 also comes out on top for weights. Its payload is rated at 705kg, whereas its between 605kg and 620kg on the Kangoo ZE. There are two side loading doors and a rubber floor covering as standard on the eNV200, while there is just one on the Kangoo ZE and the ply lining costs £75.

With 109hp and 254NM compared with 60hp and 226Nm, the eNV200 is the more powerful of the two and can reach 62mph a lot faster than the Kangoo ZE (8.7 seconds versus 20.6 seconds). In terms of refinement, they were both equally matched although the Kangoo ZE came out on top for handling thanks to its wider track and lower centre of gravity.

The Kangoo ZE’s regeneration is lot more severe which takes some getting used to, and means there’s less energy waster.

The eNV200 has a 40kWh battery and the Kangoo ZE a 33kWh battery, resulting in ranges of 171 miles and 170 miles respectively. There is no rapid charge available on the Kangoo ZE, although there is a new 32Amp charger which can take the battery from empty to full charge in six hours.

As well as the 32Amp charger, the Nissan eNV200 also offers a rapid 50kW Chademo connection, offering 20% to 80% charge in just 30 minutes. The empty to full charge on the 32Amp connection takes just over seven hours.

Renault undercuts its sibling slightly; the Renault Kangoo ZE is priced from just £18,392 plus VAT and the Nissan eNV200 from £19,221 plus VAT (although ours was the top-of-the-range Tekna costing £21,881). Both these prices have the 20% Plug-In Van Grant Applied.

While the Renault Kangoo ZE looks better, is available in two load lengths, handles better and is cheaper, the Nissan eNV200 is the winner for us. The eNV200 comes out on top for things like payload, performance, its modern cab, raised seating position and, crucially for electric vans, its longer range.